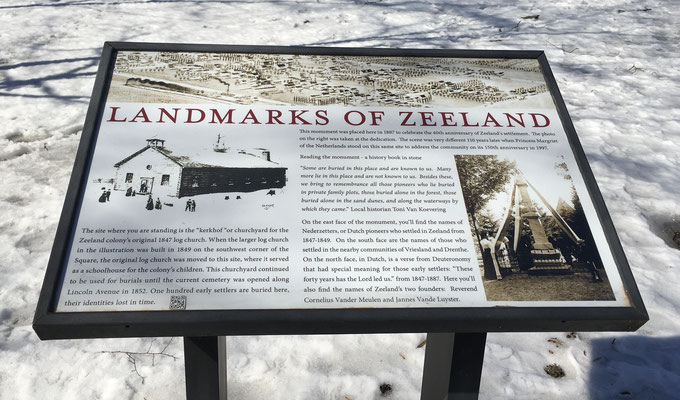 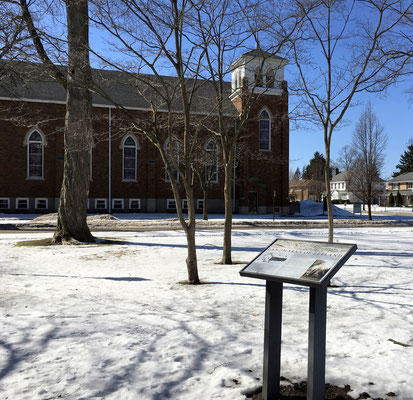 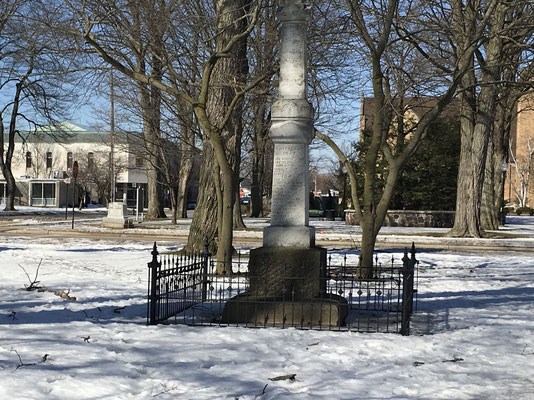 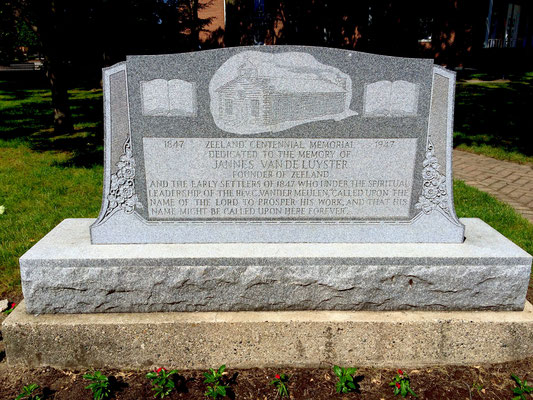 This site where you are standing is the "kerkhof" or churchyard for the Zeeland colony's original 1847 log church. When the larger log church in the illustration was built in 1849 on the southwest corner of the Square, the original log church was moved to this site, where it served as a schoolhouse for the colony's children. This churchyard continued to be used for burials until the current cemetery was opened along Lincoln Avenue in 1952. One hundred early settlers are buried here, their identities lost in time.

This monument was placed here in 1887 to celebrate the 40th anniversary of Zeeland's settlement. The photo below was taken at the dedication. The scene was very different 110 years later when Princess Margriet of the Netherlands stood on this same site to address the community on the 150th anniversary in 1997.

Reading the monument - a history book in stone

"Some are buried in this place and are known to us. Many more lie in this place and are not known to us. Besides these, we bring to remembrance all those pioneers who lie buried in private family plots, those buried alone in the forest, those buried alone in the sand dunes, and along the waterways by which they came."  Local historian Toni Van Koevering

On the east face of the monument, you'll find the names of Nederzetters, or Dutch pioneers who settled in Zeeland from 1847-1849. On the south face are the names of those who settled in the nearby communities of Vriesland and Drenthe. On the north face, in Dutch, is a verse from Deuteronomy that had special meaning for those early settlers: "These forty years has the Lord led us." from 1847-1887. Here you'll also find the names of Zeeland's two founders: Reverend Cornelius Vander Meulen and Jannes Vande Luyster.

Funding by the Community Foundation of the Holland/Zeeland Area

Photographs courtesy of the Zeeland Museum