In March 2019, we were fortunate to receive over 30 photographic printing blocks from the Vriesland Reformed Church.

In a variety of sizes, the blocks were created utilizing a chemical etching process that etched the reversed image of the original photograph onto a sheet of metal that was then nailed to a wooden block used for support during the printing process.

These images were used in the creation of the Vriesland Reformed Church’s 100th year celebration church directory in 1947.

These two smaller blocks here show portraits of two of the descendants from the page titled “Sons and Daughters of the Vriesland Reformed Church Who Are and Have Been in Christian Service”. The portraits are of Miss Johanna Meengs (laying down) and Miss Ida Tanis (standing up).  These printing blocks are currently in storage but available for viewing in the Archive Room on the second floor of the museum. 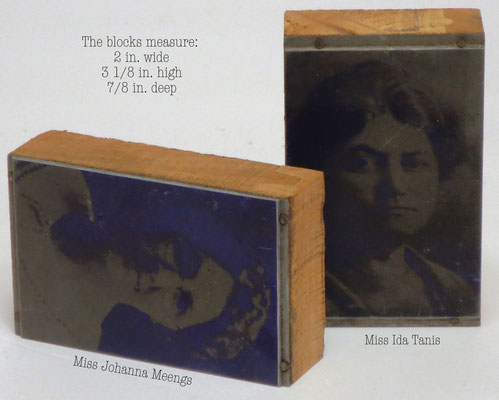 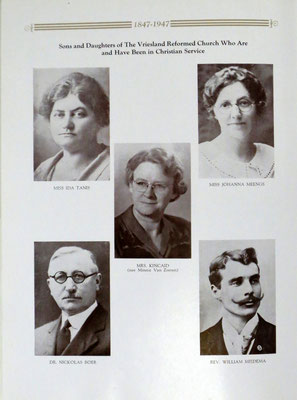 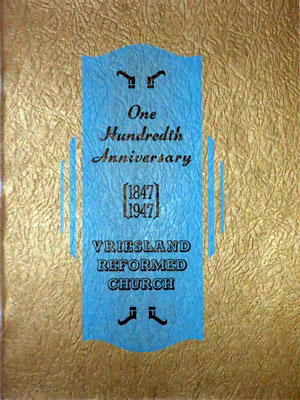 Our current board Vice-President, Volunteer Coordinator and Docent, Arlene Steenwyk, helped in the process of collecting these extraordinary artifacts including two pulpit Bibles, a document of the history of the church along with the 100th and 150th anniversary directories.  While perusing the 100th anniversary directory she was able to identify her grandparents, Mr. and Mrs. J. Ver Hage, who were photographed with the Adult Bible Study groups they were part of.

The museum’s copy of the directories can be found in the Vriesland Reformed Church files in the Archive Room on the second floor of the museum.