Tips to identify your Zeeland made clock

2.      Look for a manufacturer’s name printed or engraved on either the face, front of the case, inside the case door, or on pasted tag on the backside or inside of the clock case.

3.      Model numbers were printed in trade catalogs and can sometimes be used to identify a clock.

4.      A serial number refers to the position of the clock in a production series and can sometimes be used to date a clock.

5.      To learn the value of your clock, be sure to contact a trained appraiser. Only a professional appraiser can tell you your clock’s value based on its make, age, and condition. The Dekker Huis Museum does not do appraisals.

-John Spyker started making clocks in 1899 under the name Colonial. In 1906 Colonial Manufacturing was incorporated and made clocks until 1985.

-Model numbers were stamped on the back of Colonial clock cases below the mounted movement.

-We have several catalogs and supplements from the Colonial Manufacturing Company that range from as early as 1914 to 1980 in our archives.

-In the 1960s Colonial started applying serial numbers to their clock cases. These were printed on a metal tag that could be found on the inside of the case door. Generally, the first two numbers of the serial number refer to the year it was produced. This is not always accurate since serial numbers rolled over into the next year if they were not used up. Serial numbers that begin with 74 were used from 1974 to 1977. Colonial’s serial numbers can be used to learn an approximate date. This method of serial number dating does not apply to the Henry Ford line of clocks, which were numbered differently.

-The Herman Miller clock company was in business from 1927-1938. It produced shelf, wall, and mantel clocks.

-Movements from the German Winterhalder family were used in its mechanical clocks. They were supplied and assembled by the Herman Miller Movement Company. Many of these movements were marked Miller, Germany.

-Beginning in the 1960s, the company began making grandfather clocks.

-The company partnered with Arthur Umanoff and Associates to make a line of inexpensive all plastic clocks in the 1960s.

-Howard Miller also partnered with George Nelson and Associates from the 1950s to the 1970s. The clocks designed by Nelson and Associates were modern wall and table clocks. Among these were the iconic Nelson Ball Clock, Spike Wall Clock, and Asterisk Clock. Of course, some of these designs are still being produced and sold today through Howard Miller, Herman Miller, and Vitra.

-In the 1980s, Howard Miller began applying brass plaques to all its grandfather clocks with the name of the buyer and the date it was purchased. Be sure to look for one of these brass plaques.

-Howard Miller clocks are usually marked with the company name and or logo on the dial.

-Most Howard Miller clocks have a foil label either on the back of the clock or inside the case on the back or side. This label is printed with the clock’s model and serial number. These model numbers can be compared to trade catalogs.

-Some older Howard Miller clocks may have the words, “Made in Germany” on the label, which refers to the make of the clock movement used.

-Gerrit and Gordon Van Tamelen started making clocks under the Trend name in 1937.

-The company used electric movements made by the Hammond Clock Company of Chicago, Illinois from 1937 until 1941.

-In 1941 Trend began using self-starting electric movements from the Sessions Clock Company in Connecticut. These movements were used until WWII interrupted production.

-Hall clocks were added to their production line following the success of its grandmother clock.

-Hansen and Schatz were suppliers for Trend through the 1950s.

-A line of clocks in the French Provincial style was introduced in the 1950s.

-In 1968 Trend was sold to the Sligh Furniture Company. From 1969-1984 Sligh continued to use the Trend name on its clocks. Clocks from this period will be marked with “Trend Clocks by Sligh.”

- From 1984-2005 clocks were made solely under the Sligh name. Sligh continued to produce clocks until 2005 when its ceased clockmaking completely.

-The H. L. Hubbell Company made clocks from the 1970s through 1986, when the Zeeland Hubbell plant was closed.

-When Craig Hubbell took over the company in 1974, grandfather clocks were added to the production line.

-Clocks made by the company were marked with “H. L. Hubbell” on the dial.

-In 1979 Hubbell entered a partnership with Burwood Products of Traverse City, Michigan. Burwood made products out of composite wood or a plastic material that could be injection molded.

-From 1979 until 1986 Hubbell made clocks under both the Hubbell and Burwood name. Clocks made during this period usually have a metal tag on the inside of the case printed with both company names and a serial number.

-The H. L. Hubbell company produced a line of clocks in partnership with Burwood in 1979 called the New Haven line.

-In the 1980s the company included a gold tag on their hall clocks, inscribed with the name of the buyer and the date the clock was purchased.

-Burwood continued to make clocks until the early 1990s. 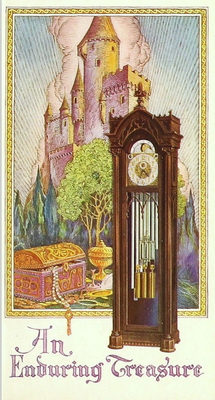 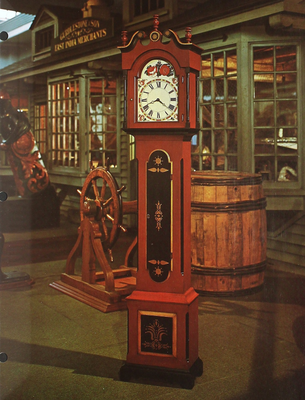 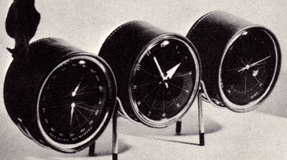